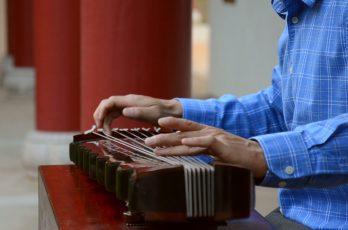 The term “Ao Ai” 《欸乃》 originally appeared during the Tang Dynasty, in a poem by Yuan Jie 元結. As a guqin melody, however, this piece traces to 1549. Also known as the “Northern Fishermen’s Song” 《北漁歌》, the more well-known title “Ao Ai” is an onomatopoeia—it’s melody was written to conjure… 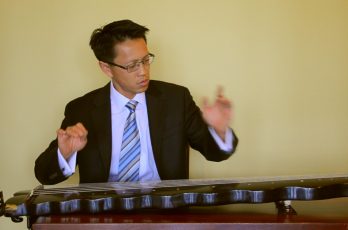 Launched into space in 1977, the Voyager Golden Record, with a rendition of Flowing Waters 流水 by Guan Pinghu 管平湖, flew past Pluto’s orbit, left the edge of our solar system, and entered interstellar space.

My teacher, Lui PuiYuen 吕培源, reintroduced me to this piece. While dating to some time in remote antiquity, this rendition, with 72 gunfu 滾拂 rolls, is attributed to Zhang KongShan 張孔山 of the Sichuan school from the late 19th century.

I find the middle sections the most interesting. Starting from the beginning, though, the opening measures seem to depict the grandeur of majestic peaks. Then, a flutter of harmonics, repeated in octave intervals, along with glissandi, conjure up images of a small trickle, perhaps from fresh snowmelt. Among the towering peaks, rivulets carve channels. They coalesce into a roaring river, with churning waters bursting the banks. Again, droplets of harmonic glissandi spray the listener who sits near the cascading stream. The music broadens as the river widens into an alluvial fan on its way out to sea. 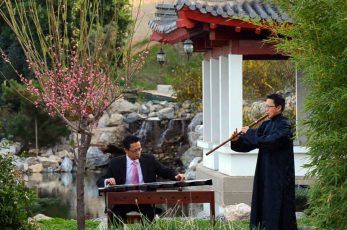 The Chinese plum trees have burst into pink clouds over the past week, putting on a show of fully-double flowers. These blossoms make a perfect accompaniment for this wintry new year season. Over millennia, the plum blossom held captive the Asian imagination. Blooming in winter, it evokes the virtues of… 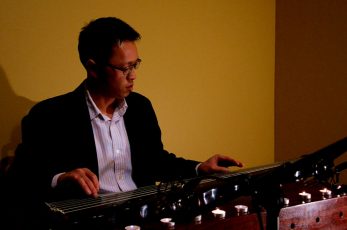 This is the longest piece I’ve learned. Consisting of eighteen sections, Songs of the Fisherman 漁歌, like many other guqin pieces, portray the retreat to an existence that is immersed in the natural rhythm of the universe. The earliest printed version dates to 1546, and the associated original preface depicts…

One of my favorite Christmas hymns, Of the Father’s Love Begotten is based on the medieval plainsong melody Divinum Mysterium, which first appeared in print in 1582 as part of a song collection known as Piae Cantiones. Coupled with the Latin poem Corde natus by Aurelius Prudentius, it takes on… 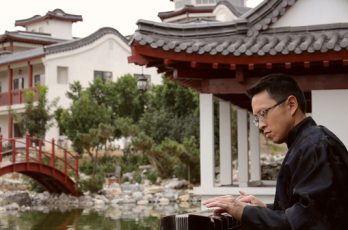 While this melody is quite ancient, even by the time it appeared in print in 1559, Dialogue of the Fisherman and the Woodcutter 漁樵問答 remains a popular tune in today’s guqin repertoire. Two popular motifs are intertwined in this piece. The title clearly underscores Daoist themes—that one gains special knowledge… 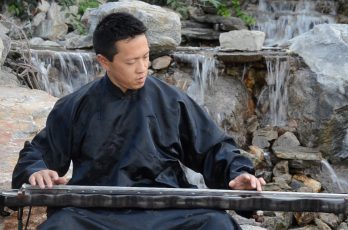 Sitting on a large boulder by the waterfall, I recorded this ancient piece—Flowing Spring of Jade Stream 碧澗流泉. Like many guqin melodies that express motifs from nature, this one is supposed to evoke the mood of a gentle brook cascading over rocks. Normally accustomed to playing on a guqin table,… 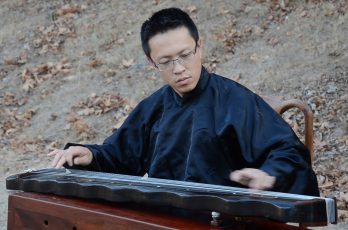 This short melody, dating from 1549, depicts the fall season at Dongting 洞庭湖 in Hunan 湖南 province. This lake basin is fed by four river: the Xiang 湘, Zi 资, Yuan 沅, and Li 澧. The piece is divided into three parts, with the first and last parts in one… 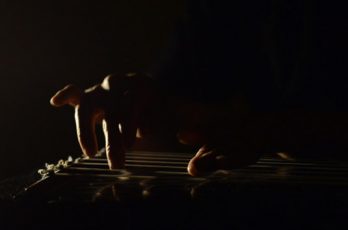 Long ago, before there was Chinese writing as we know it, before we have the seven-stringed guqin, before the great flooding, a celestial being appeared and warned of the imminent danger. This account is attributed to Emperor Yao 堯 (c. 2300 BC), who received the celestial while he was offering… 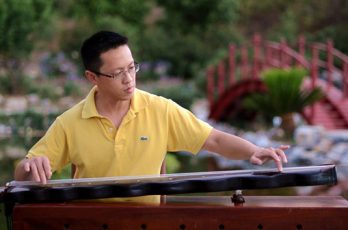 No other tree conjures up as much literary imagination as the Chinese Parasol Tree (Firmiana simplex). According to tradition, it is only the Firmiana that the phoenix chooses to alight upon. The autumn season is closely associated with this tree, whose broad leaves turn to gold and drop, supposedly one… 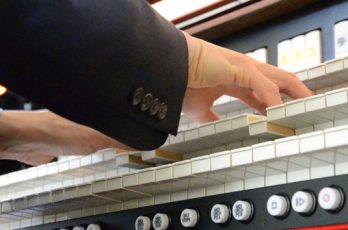 Because of the first theme’s similarities to the hymn “O God, Our Help in Ages Past,” Bach’s Fugue in E-flat Major (BWV 552/2) is known in the English-speaking world as St. Anne’s Fugue, even though this hymn would not have been known to composer. The contrapuntal form typifies fugue construction,… 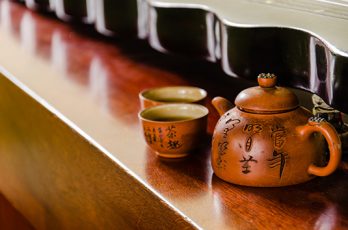 This piece, YiGuRen 憶故人, Thinking of an Old Friend, is a relatively recent composition. Although melodically simple, the tune is layered in complex meaning. It starts out with harmonics that set the mood before delving into the main section. This part begins abruptly, as if with a flutter of emotions… 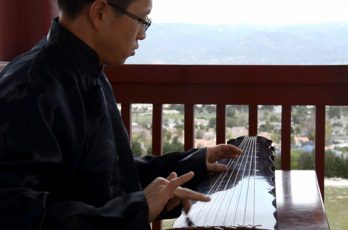 This melody has two titles: Tune of the Sea Dragon 滄海龍吟 and Night Rain on the Vast River 滄江夜雨. The former name is more well-known, and it is attributed to the Three Kingdoms strategist, Zhuge Liang 諸葛亮, who is also known as Kongming 孔明 and the Sleeping Dragon 臥龍. Originally…

This version of Lament at Changmen Palace 長門怨 is from the Mei’an Guqin Manual 梅庵琴譜 of 1931, but the melody is from centuries earlier. The accompanying story, however, dates from the Han Dynasty. ﻿ When Liu Che 劉徹 ascended the throne in 141 BC and became Emperor Wu of Han…

This piece from the MeiAn School 梅庵琴派, Moon over the Mountain Pass 關山月, alludes to the poem by Li Bai 李白 with the same title. This recording was made a few hours before the actual full moon, capturing its rise from behind San Bernardino Peak. 明月出天山，蒼茫雲海間。 長風幾萬里，吹度玉門關。 漢下白登道，胡窥青海灣。 由來征戰地，不見有人還。 戍客望邊邑，思歸多苦顏。… 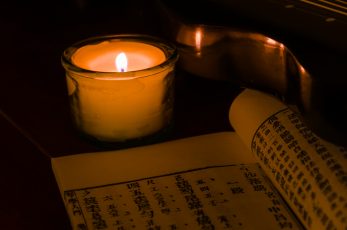 First published in 1634, the piece, Wild Geese Descending on Sandbanks 平沙落雁, became widely popular in subsequent centuries, existing in many variations and tunings. The music opens with an introduction of harmonic octaves partial scales, evoking the imagery of geese lining up, perhaps flying in formation through distant clouds. The… 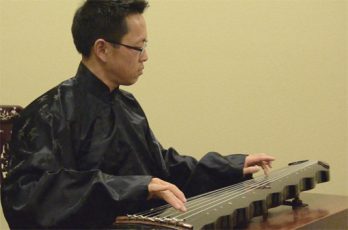 This piece is titled Seagulls and Forgetting Schemes 鷗鷺忘機. The story originates from a passage in the Han dynasty text Liezi 列子. Therein, a seafarer finds that that seagulls have no fear until he intends to catch them to bring home. Like rolling waves, initial series of harmonic glissandi invite… 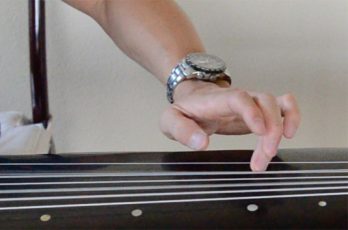 At my tenth lesson, my teacher gave me this piece to learn. It is the slightly shortened version of Pu’an Zhou 普庵咒. Apparently, the full version is extremely repetitious. As it is, this is the longest piece that I’ve played. ﻿ The earliest form was published in 1592 and later… 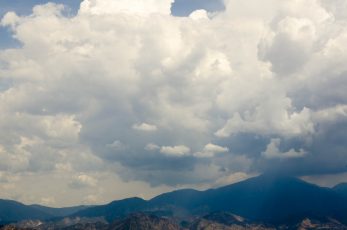 Like my most recent pieces, this composition, Summoning the Wind and Thunder 風雷引, is from the collection of the Mei’an guqin handbook 梅庵琴譜 and uses the lowered third string tuning. As with most pieces of the Mei’an tradition of briskly paced rhythm, this song employs unison and octave chords to… 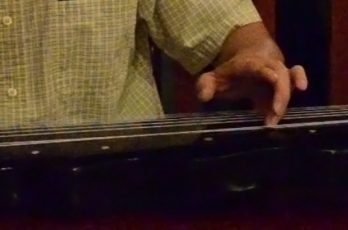 Also in the Shang tuning mode 商調 and from the Mei’an handbook 梅庵琴譜, this piece, Autumn Evening Moorings 秋江夜泊,  is a tonal painting depicting Su Dongpo’s 蘇東坡 (1037–1101) poem of the Red Cliffs 前赤壁賦. The site was where he thought the famous battle took place in the winter of AD… 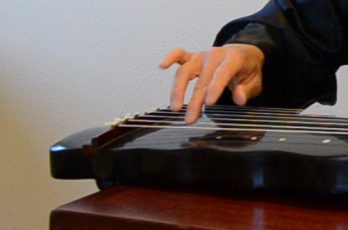 This next piece, The Phoenix Seeks His Mate 鳳求凰, is an introduction to playing in the Shang tuning mode 商調 and is of the Mei’an school of guqin playing 梅庵琴派. The story of this song is about the poet Sima Xiangru 司馬相如 (179–113 BC) as recorded in the Shi Ji 史記.…

Like the two previous pieces, Tune of Utmost Joy and Three Repetitions at Yang Pass, Spring Dawn at the Jade Tower 玉樓春曉 is based on the RuiBin 蕤賓 tuning mode. The origin is from the MeiAn school of guqin playing 梅庵琴派, which is part of my teacher’s tradition. The tune… 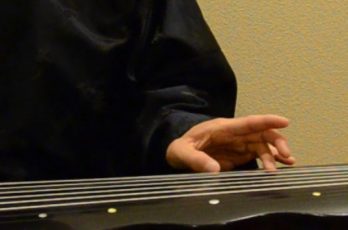 One of my favorite melodies, Three Repetitions at Yang Pass 陽關三疊 captures the essence of the poem by Wang Wei 王維. His work, titled Seeing Yuan Er Off to Anxi 送元二使安西, depicts two friends about to part ways: one staying within what was then civilized China, and the other leaving… 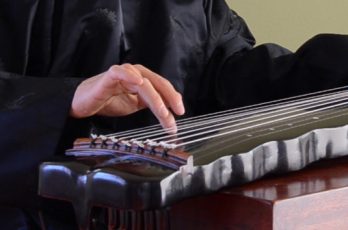 It seems ironic that this song—Tune of Utmost Joy 極樂吟—sounds the most melancholy as set in a minor key. It isn’t truly in a minor key, but the guqin is tuned to the RuiBin 蕤賓 mode, where the fifth string is tightened a half step. In the modern tuning tradition,… 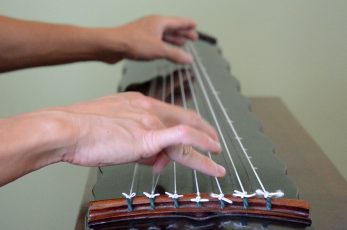 While this is one of the most ancient of guqin tunes, it is also one of the most popular in today’s repertoire. Wine Madness 酒狂 dates from the third century and is attributed to the poet Ruan Ji 阮籍, who was one of the seven sages of Bamboo Grove. His…