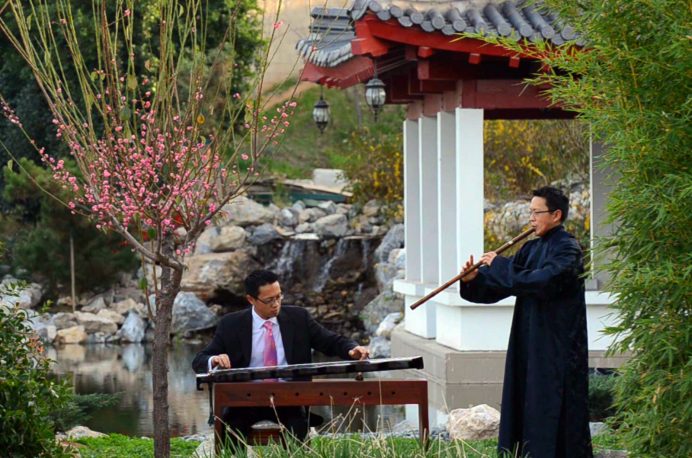 The Chinese plum trees have burst into pink clouds over the past week, putting on a show of fully-double flowers. These blossoms make a perfect accompaniment for this wintry new year season.

Over millennia, the plum blossom held captive the Asian imagination. Blooming in winter, it evokes the virtues of fearlessness of the bitter cold and endurance in the face of adversity.

The origins of the Three Variations of the Plum Blossom Theme 梅花三弄 trace to the fourth century. Gaining popularity, the basic melody permeates the repertoire of most Chinese instruments. I had originally self-taught the guqin piece and played it after I finished making this guqin, but now I’ve learned it through this journey of formal lessons. As you’ll hear, the melody sections on the guqin are played using harmonics, each using different parts of the instrument and in varying octave registers and overtones. As the theme starts each time, I’ve chosen to depict ‘Peggy Clarke’ plum blossoms in the film. The introduction, middle sections, and end combine interlude material with parts borrowed from the melody.

Last October, my parents brought me this flute from China, and interestingly, the name carved on the flute is the very same title of this song: 梅花三弄, or literally translated Plum Blossoms Thrice Played.

Putting this melody together was most beautiful underneath an umbrella of petals in the garden.