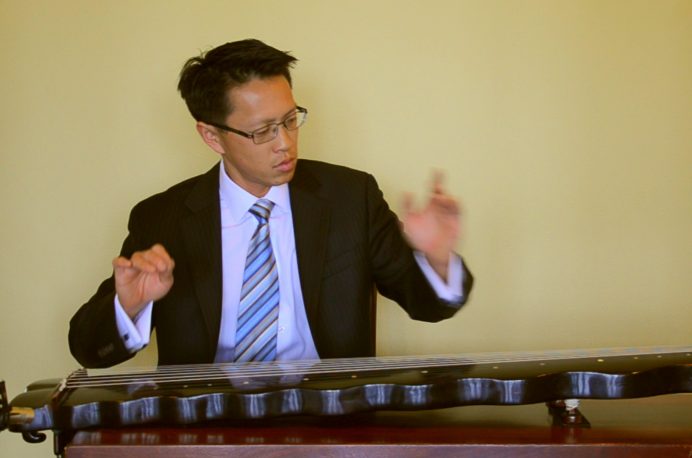 Launched into space in 1977, the Voyager Golden Record, with a rendition of Flowing Waters 流水 by Guan Pinghu 管平湖, flew past Pluto’s orbit, left the edge of our solar system, and entered interstellar space.

My teacher, Lui PuiYuen 吕培源, reintroduced me to this piece. While dating to some time in remote antiquity, this rendition, with 72 gunfu 滾拂 rolls, is attributed to Zhang KongShan 張孔山 of the Sichuan school from the late 19th century.

I find the middle sections the most interesting. Starting from the beginning, though, the opening measures seem to depict the grandeur of majestic peaks. Then, a flutter of harmonics, repeated in octave intervals, along with glissandi, conjure up images of a small trickle, perhaps from fresh snowmelt. Among the towering peaks, rivulets carve channels. They coalesce into a roaring river, with churning waters bursting the banks. Again, droplets of harmonic glissandi spray the listener who sits near the cascading stream. The music broadens as the river widens into an alluvial fan on its way out to sea.

One of the most celebrated guqin pieces, Flowing Waters gained popularity early on. More than just evoking the churning of cascading streams down tall mountainsides, this melody more importantly alludes to a deep friendship that bridges social boundaries.

In the Spring and Autumn Period (771-476 BC), a woodcutter from the state of Chu 楚 named Ziqi 子期 developed a close friendship with a literati named Boya 伯牙. Boya was a skilled guqin player, and only Ziqi was able to recognize the meaning of whatever Boya played. When Boya focused his playing on flowing streams, Ziqi exclaimed, “How vast like the flowing waters!” Whatever Boya played, Ziqi understood. When Ziqi died, Boya severed the strings of his qin, never to play again, because there is none other who can understand his music.