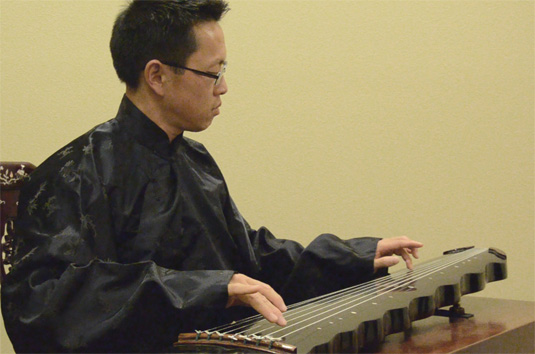 This piece is titled Seagulls and Forgetting Schemes 鷗鷺忘機. The story originates from a passage in the Han dynasty text Liezi 列子. Therein, a seafarer finds that that seagulls have no fear until he intends to catch them to bring home.

Like rolling waves, initial series of harmonic glissandi invite the listener to the serene seaside. The first section, with deep stopped tones modulated by bending notes, depict the seagulls as they congregate, seemingly carefree. A more frantic mood is felt in the second section. The birds, having sensed ulterior motives and schemes, now show fear and refuse to fly near. At the end, the coda returns the ocean’s calm.

From the Yellow Emperor 黃帝 chapter, with my translation: