Harmony of God and Men 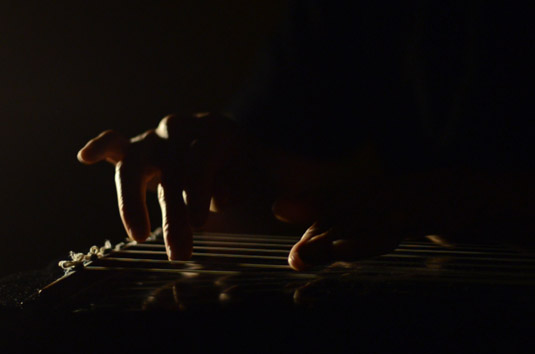 Long ago, before there was Chinese writing as we know it, before we have the seven-stringed guqin, before the great flooding, a celestial being appeared and warned of the imminent danger. This account is attributed to Emperor Yao 堯 (c. 2300 BC), who received the celestial while he was offering a sacrifice. Being a zither player, he then composed this melody after being saved from calamity. His tune, titled Harmony of God and Men 神人暢, commemorates the celestial’s revelation.

The earliest form of the guqin had five strings. Later, two higher notes were added to make seven strings. Played only on the lowest five strings, this melody heralds from that ancient time. Interestingly, this piece sounds nothing like what we think of as Chinese music, with its familiar pentatonic scale. The first, middle, and end sections are a study of harmonics, while the intervening passages explore open strings and stopped notes, even including accidentals. The tune finishes off with a perfect fourth dyad, as if from a time and place that is so far away.