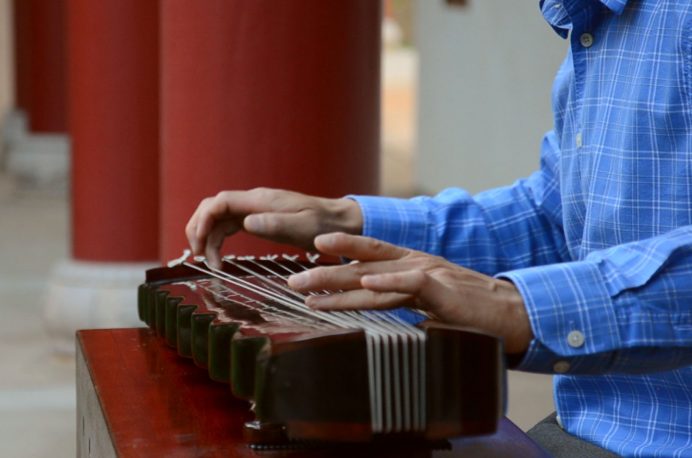 The term “Ao Ai” 《欸乃》 originally appeared during the Tang Dynasty, in a poem by Yuan Jie 元結. As a guqin melody, however, this piece traces to 1549. Also known as the “Northern Fishermen’s Song” 《北漁歌》, the more well-known title “Ao Ai” is an onomatopoeia—it’s melody was written to conjure up sounds of oars and chants associated with rowing. Because of this allusion, several English translations call this piece “The Boatmen’s Song.”

The song begins with deep sounds layered in glissando followed by pushing and pulling sounds in the lower register. Playful harmonics splash through the next several sections, interspersing the more serious mood with casualness. One of the more characteristic motifs is the repeated notes, switching between the tonic and dominant to mimic the cycle of rowing. This motif recurs in increasing complexity as the piece progresses toward a climax. Maybe it’s the rising wind and waves. Perhaps, it’s the frenzy of the catch. But in the end, the excitement disperses, giving way to calm.