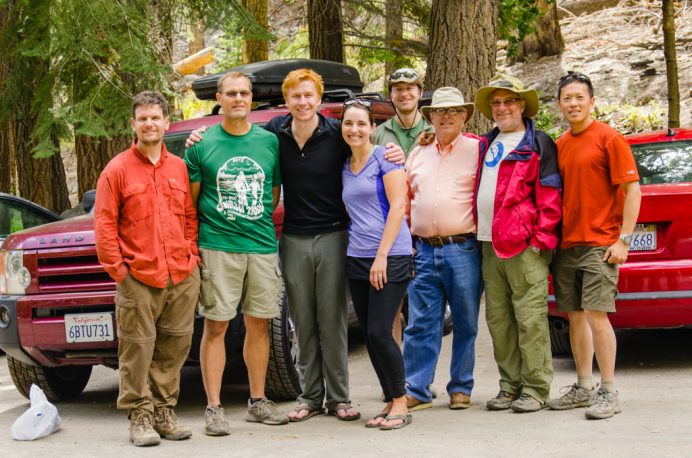 Hikers bidding for the summit trudge by our campsite. Even though it’s barely light outside, I see their headlamps and hear their voices. Then, I hear Mickey. He and Wayne are off early as well. They are going to hike down to Whitney Portal first, where they will unload and clean up, thus avoiding the second morning of wag bag use. Mark is also out of the tent. He’s gone for quite some time. I get myself out of the sleeping bag and do some preliminary packing.

I see Mark return with a grin. “Where’d you go?”

Smiling sheepishly, as if defeated, he says, “I had to use the wag bag. I lost the bet.”

“Wasn’t that a terrible experience?”

“Yeah, that was terrible.”

Lucas is up, and he feels a lot better. He said that he got up in the middle of the night, and the little bit of sleep helped him. It was probably a combination of sleep deprivation and altitude sickness.

I packed a no-cook breakfast, but we make coffee. This time, it’s the instant Via from Starbucks. There are only two packets, one for each. Not knowing we are not doing double servings, Mark boils extra water, purposefully dilutes his, and mockingly glares at me: “blonde roast.” I know he’s ridiculing the light roast coffee we’ve been having for the entire trip. We sit there and enjoy watching the sun light up the sheer face below Thor Peak, where rays bounce off and cast a beautiful glow on our campsite. My homemade tent is still holding up after all these trips.

After eating and wag bagging and sanitizing and packing, we head down the gentle trail, past a picturesque meadow, and down along Lone Pine Creek. Along the switchbacks, we see Lone Pine Lake sitting like a jewel perched on a ledge, high above the Owens Valley. We hike past the spur trail to this lake and wind down relentless switchbacks. Soon, we see the cars.

Upon reaching Whitney Portal at 10:00, an hour before our appointment time, Hans is the first to greet us. He says we all look weathered, worked under the elements and toughened by the sun. This is good, and we’re all so happy to be reunited as planned. We weigh our packs, and mine is 38 pounds—a full eleven heavier than Mark’s. He feels bad, but I tell him it’s OK. I have the seven pounds of camera gear, along with the ten extra pounds of wag bags and other stuff to throw away. We get pictures of me holding the sack of wag bags and him holding our trash from the week. It feels good to dump all that.

At the car, the reunion is complete—Mike, Wayne, Lucas, Ashlene, Mark, Hans, Mickey, and me. As Tony and Sean once said to me on our trip from Horseshoe Meadow to Upper Rock Creek while they were fourth year residents, backpacking changes a relationship; indeed it has. We’ve made new friendships and deepened old ones; we’re good. Now, we make plans to enjoy lunch at the Ranch House Café in Olancha. We’re all starving, and that plan sounds like luxury.

Luxury is in the little things—not so much in the things themselves, but in the value we assign to them. In the wilderness, as is with life, the little bit and how we think of it often go a long ways.

It’s the yellow notepad, the dark chocolate-covered goji berries, the deck of cards. It’s the devotional and the hymnal. It’s the sprig of fresh thyme, the slivers of crunchy carrot, the squeeze of tart lime juice. It’s the fishing tackle and the French press and the luxury fuel. Though I’ll probably leave the zoom lens behind next time, it’s the camera and tripod. I now wish I hadn’t talked Mark out of bringing the ugly pink bucket.

But by evening time tomorrow, Mark will have told me that he’s ready to go backpacking again. I’m happy, because I’ll get to use the pink bucket and experience luxury in ways I’ve never imagined, on the next trip, and on many more trips to come.