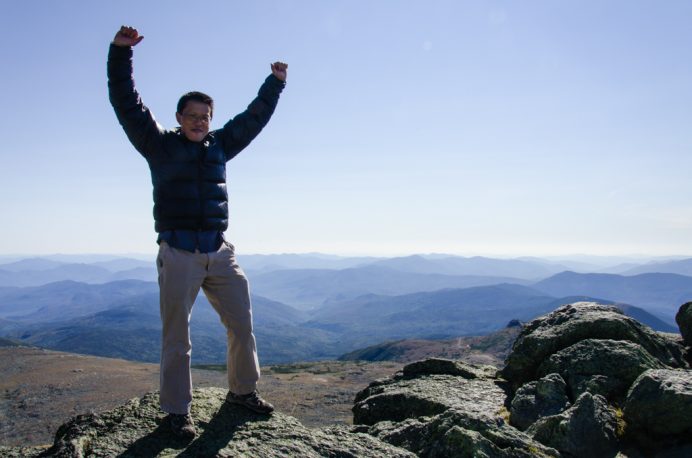 This has been a phenomenal hiking season. Starting with summiting one of the most prominent mountains of Southern California—Mt. San Jacinto, the peakbagging list includes Mauna Kea, Mount Whitney, and now Mount Washington.

I’ve read about Washington many times. Visiting Boston for the American Society for Surgery of the Hand meeting, I knew I had to make a side trip to the White Mountains. Coincidentally, while flipping through the current issue of Backpacker, I came across a brief guide to the summit of Mount Washington via the Ammonoosuc Ravine Trail. Even though the climb was pretty much straight up the mountain, this route was more crowded than I had thought.

The river is beautiful, cascading along the entire ascent up toward Lake of the Clouds Hut. Ice crystals over parts of the open rock face where water once flowed. Near a picturesque waterfall, frozen crystals are strewn like a spread of diamonds.

At the hut, the tomato soup hot, hearty, and simply amazing. Just beyond, a sign warns hikers: “STOP! The area ahead has the worst weather in America. Many have died there from exposure, even in the summer. Turn back now if the weather is bad.” Cairns mark the trail in case of a white-out, but there is not a cloud in the sky. Near the summit, horizontal icicles appear, having formed sideways in the piercing wind. A Snickers bar is part of the summit celebration.