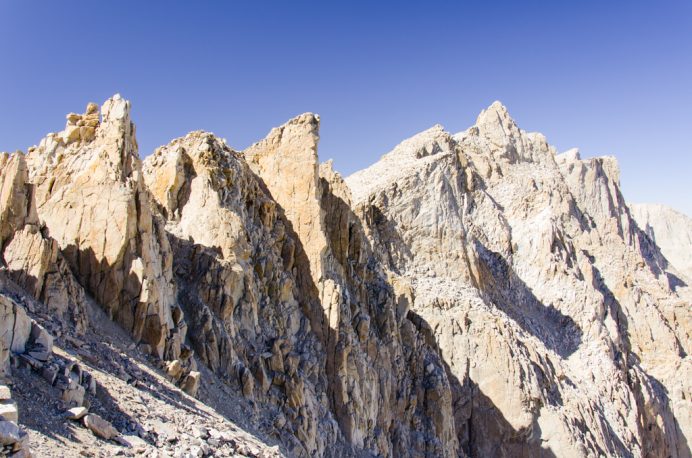 The alpenglow foreshadows the glorious day this will be. Hovering above the Great Western Divide, just before sunrise, the band of orange sky washes the entire landscape in a warm hue, in absolute contrast to the nippy cold air. The pinkish color of the meadow’s grass looks a bit strange.

Of my group, I’m the first to get up. Soon, the rest are up as well, and we have a quick breakfast. I lean on the backrest rock that Mark picked out—he has an obsession about finding good backrests—and have the usual morning French press coffee while watching the sky turn from orange to blue.

Then, it’s wag bag time. The packet is pretty well-designed, complete with toilet paper, hand sanitizer, and chemicals. These chemicals, supposedly for odor control, don’t work well. Neither does the outer zip-lock bag; we will be haunted for the rest of the trip.

Just before leaving camp, a doe wanders near the inlet creek to Guitar Lake, saunters over to shore, and takes a few sips. Then she grazes peacefully along the bank. I pull out my zoom lens for the second time and catch a few shots. I tell myself that using the zoom only twice in a trip gives me pause; maybe I should just leave it behind next time.

Although this is the earliest that we’ve gotten ready, we’re about the last one making it out of camp. The other campers already struck out early for the summit bid. Mickey takes the lead while I bring up the rear. Wanting an action shot, I run ahead, scramble up some switchbacks, and get some shots. Mark and I fill up from the last water source before the long climb, chugging a cold liter and topping off our supplies. Standing in the shadows of Whitney and filled on the inside with snowmelt, we’re both freezing. Mark decides to hike fast, and we both scuttle up the trail. About two-thirds the way up to Trail Crest, the first rays of sun peek through but play hide-and-seek among rock spires. Mark had made an appointment with Lucas, his co-resident of the same year, where between 9:55 and 10:05, they would try to make radio contact. I somehow have a sense that it’s nearly 10:00, so I pull out my watch—the other unused luxury item that I will most likely leave behind next time. It’s 9:58! Mark turns on his radio. “Lucas, Lucas. This is Mark.” No response.

We make it to the junction and empty the heavy items out of our packs: tent, pots, bear canisters, trash. I arrange the wag bag sack over our stash and rope everything together, hopefully dissuading any would-be thieves. Soon, the rest of the team joins us, and we head off for the summit.

Mark is anxious to make contact with Lucas. Before the trip, he had planned to join us on the summit, coming up from the eastern side, since he was unable to take the entire week off for the long backpacking trip. That’s why, as a backup plan, I got the permit for seven people to include him and his wife, Ashlene. I would later find out that he had called the Ranger Station in Lone Pine, and they said it would be perfectly fine for them to not get their own permit and just tag on to us.

Just beyond Trail Crest, we head up the main trail to the summit. After a few hundred yards, between the needles, we catch a good view of the Owens Valley. “We can see our destination!” I tell Mark. It almost feels like setting sail and finding land months later. I ask him to try the radio again, since we now have line-of-sight contact with the eastern side of the range.

“This is Mark and Danny,” I prompted. He’s still not used to calling me anything.

Finally, there’s a reply! We find out that Lucas and Ashlene are still below Trail Camp, and it would be a few hours before they make it up to Trail Crest. We proceed toward the summit, and from there, we radio again. They are now about halfway up the switchbacks. Mark wants to wait for Lucas to join him at the summit; during the past several days, he’s been really looking forward to sharing such a moment. I don’t think the timing will work out.

The five of us—Wayne, Mark, Mickey, Mike, and I—take in the views at Mt. Whitney summit. Wayne tries to see if Heather will pick him up a day early. Mark lets his dad know that he wants to take him backpacking and fishing. He tells Sarah he misses her: “I’m supposed to say that the ring is hanging by my heart.” I sense Sarah smiling, and I ask Mark to say hi to Sarah and his dad. I wanted to wish his parents a blessed Sabbath afternoon, but cell reception and battery life are precious up here. For some reason, I have no signal. Lucas radios back, saying that he and Ashlene, now further up the switchbacks, are turning back on the trail; they are feeling the effects of mountain sickness. After getting our summit picture, we decide it is time to head down so that we can make it to camp before it gets too late.

Anxious to see Lucas, Mark bounces down the trail. He’s hard to keep up with, but I try to follow closely behind. We repack our belongings at the junction and climb over Trail Crest. The way down the switchbacks is pure drudgery, but Mark marvels at the skilled trail building. We’re looking back at the gnarly face of the mountain flanked by spires and needles as they claw at the sky, and Mark tells me that he now realizes Mt. Whitney is a legitimate mountain. It had never occurred to him that it was a serious climb, both up and down, but today, he feels that he really had to work to stand on top of it.

Mark used to be part of the mountain search and rescue team in New Mexico, and he prides himself in being a serious mountaineer. So, after thinking about what he just said, I ask, “Are you saying ‘backpacker,’ like in a pejorative sense?”

“Yeah, like from mountaineering to backpacking, a downgrade, right?”

Mark denies it, and not wanting to press any further, I drop the issue.

We make it down where we can see people more clearly at Trail Camp. Lucas and Ashlene are supposed to wait for us here and hike down together. As we near the end of the switchbacks, I speak loudly, asking Mark if they will be able to see us on the trail. Upon hearing his name, Lucas jumps up and waves to us, and Mark, with much élan, dashes down the trail. He’s been waiting for this reunion moment.

It’s great to meet up with Lucas and Ashlene. After leaving a week ago and not knowing exactly how the permit situation will work out, it’s hard to imagine this moment. Ashlene had brought these amazing homemade fig bars; these are a welcome treat after being out for so many days.

“Mark, what was it that you’re supposed to tell Lucas?”

“Lucas, I’m supposed to tell you that Danny is inept at making coffee using the French press.”

We all have a great laugh—Lucas hearing the awkwardness in it, and Mark still not comfortable after having rehearsed this line several times.

Unlike Mark, Lucas immediately gets the hint and jumps at the opportunity: “So, I see that you and Danny bonded during the hike.” Mark grins at that comment.

After the others catch up, Mickey and Mark head down the trail first. I hike with Lucas and Ashlene, catching up on details of their trek up to this point. On a rocky knoll just above Mirror Lake, Lucas throws up. He’s sick from the altitude. Feeling better after losing his lunch, we make it to camp. Lucas crawls into his tent, and that would be the last time we see him that afternoon.

Dinner is French onion soup and mac and cheese with broccoli. Mark had been looking forward to this meal for the last several days, talking about how he was craving mac and cheese. Out here, there’s nothing like comfort food. I clean up while Mark prides himself at making dinner all by himself. He melts the cheese in the soup. He boils the macaroni and wastes fuel in the process. I return just in time for dinner to be ready. Hot cheesy soup on this cold evening hits the spot, as does the mac and cheese. Ashlene has some soup as well. After dinner, while organizing the trash, I find the four packets of unused Tabasco sauce. It was supposed to be for the mac and cheese. Mark feels bad, having taken pride in making dinner and now realizing that he overlooked something. I pull out the food plan; the Tabasco sauce isn’t on there, so I tell him that it’s my fault for not putting it on the grid.

We do our last night of dishes at the base of a tree not far from the stream. My fingers are frozen, so I’m glad that Mark is the one doing the dishes tonight. It’s getting dark, and I have to take several trips to get water. That’s because there’s no pink bucket to make warm water to do dishes in.

I’m exhausted from the long hike today. While feeling triumphant for summiting Whitney, I’m also spent. It’s time to turn in early. Mark climbs into the tent first. Then, right at this point, the moon inches over the southeastern ridge. Soon, it fills the bowl of Outpost Camp and lights up the vertical granite slabs below Thor Peak as it stands sentinel over our tent. This is a glorious end to a spectacular day.