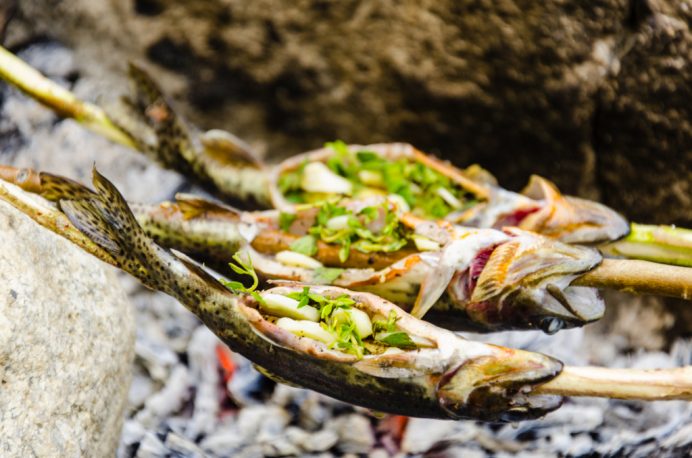 We’ve been looking forward to this mid-trip breakfast. Even though the powdered eggs had turned rubbery when overcooked, the vegetarian bacon bits add enough flavor to the dish of scrambled eggs and hash browns. The little packets of ketchup make all the difference. Along with two rounds of French press coffee, this turns out to be our favorite breakfast.

Before leaving, I suggest that we try singing a song. I’ve done this on many trips, and it gets everyone involved. Another luxury item in my pack is the pocket hymnal, and I turn to “When Peace Like a River.” We do this in parts, with Mickey carrying the melody, Wayne singing alto but an octave lower, and Mike taking the base. I fill in the tenor part. It turns out really nice. “This has got to be my favorite hymn,” Wayne says.

Soon, we’re on the trail. Because we’re down on the Kern Canyon’s floor, we set off while the sunlight is still inching its way down the cliffs. There are numerous creek crossings along this trail. Being far from sure-footed, I nearly take a spill on one of those fords.

Wayne and Mark march on at a determined pace. I occasionally catch up but eventually lose them. Along this river valley, between vertiginous cliffs that gradually give way to rounded moraines, I find that the solitude of hiking at my own pace confers a better sense of peace. There is no real need to catch up, and there’s no worry about needing to bring up the rear.

The five of us convene at Junction Meadow. I find Wayne and Mark studying the map, trying to decide if we should camp higher along Wallace Creek. Mike arrives shortly and tells me that he had seen me nearly fall into the creek after stepping on the unstable log that he deftly avoided, but he witnessed Mickey lose his balance. Here, we have a long lunch and nap. After all, we’ve made it here in good time, and our planned campsite is not too far away.

Wayne, Mark, and I head off first. There’s to be a vote at the junction. Mark wants to hike east up Wallace Creek so that it would cut off a few miles from tomorrow’s plan. Wayne prefers to stay at Upper Kern Canyon as planned. The trail rises steeply on a rocky slope with little cover except for low manzanita bushes. About a mile into this ascent, we soon approach a stand of mixed conifers and deciduous trees. At the junction, there isn’t much of a vote. Mark doesn’t get his wish, since I, as tiebreaker, had originally outlined our trip plan to stay at the Upper Kern; that’s still my vote today. As Kevin would say, we didn’t want to be off the grid. “So far on this trip,” Wayne says, “Danny’s been able to get us to do everything that he wants—and with a smile.” That’s funny, and I think of my sister, Alice, who does that to me but much more skillfully. We scout out and find the abandoned sheepherder’s cabin. Nearby, there are beautiful campsites.

This campsite is a pretty one. Situated on a small bluff above the Kern River, one can smell the deep woods and the old campfire. Below, the Kern tumbles along rocky banks lined with quaking aspens that rustle in the afternoon breeze. While we set up camp, clouds appear for the first time, diffusing the sunlight into a soft glow.

Mark is intent on catching more trout. He tells me that he feels the stress, the pressure, of needing to catch more to make “trout on a stick” so that he can rectify the lack of photographs from yesterday. Above this point, there are no protected species.

I am intent on getting cleaned up before the sun disappears behind Key Point and the Kern Ridge. There is a nice pool, and I convince Mike to jump in as well. Without the direct sun, it’s cold. The Kern feels like direct snowmelt.

In this snowmelt water, among the quieter pools a little downstream, Mark catches a trout. Good, the pressure is off. He brings it by to show me and then hooks two more. I gut them—this is my second time cleaning fish—and Mark washes out the cavity while Wayne pours water from the Nalgene bottle. I pick out the kitchen pack and prepare the garlic, lemon, and herbs. Then, I find a few green aspen branches to skewer the fish for grilling.

To prepare for dinner, I ask Mark to cut up the fresh onion for the Japanese curry. I start the rice and boil up the miso soup. The soup, curry, and rice form a heartwarming trio, much needed when the warm sun is hidden by the tall western cliffs. Mark loves the taste of freshness: “The onion is amazing.”

By this time, the fire has burned down to glowing chunks. Mark arranges the rocks and carefully suspends each fish. Above the cavity rubbed with salt and pepper, stuffed with garlic and thyme, and drizzled with juice from a fresh lemon, I ask Mark to put dabs of butter. The hot coals melt each dollop, making it ooze through the herbs, infusing flavor into the fish. It doesn’t take long to make “trout on a stick.” I dissect out the aspen branches with chopsticks and slide the triplet onto the pan. Aside from Mark, we’re pretty much vegetarian, but Wayne tries a bite, and I have about a whole fish. This is the pinnacle of backcountry cooking for Mark. “I’m going to have to take my dad backpacking and make him ‘trout on a stick.’”

We’re sitting there, and Wayne says he has a story to tell, one about me. He had been holding out. Apparently, along the difficult hike up to Kaweah Pass, there was a point where I caught up to him, and stepping aside, he told me to pass. Wayne chuckles: “Danny said, ‘I’m good,’ like I’m fine not passing you, and then he just kept right on going…like a little arrogant comment.” We all laugh. My memory draws a blank, but for the rest of the trip and even afterwards, I would catch myself saying “I’m good” or “We’re good” or “It’s all good” a lot.

Around the fire, I get everyone to sing a couple more hymns. We sound terrible, and none of us can sight sing the parts well. Only Mike sings well, and the rest of us are horrible. I hid the fact that I had directed a choir for a number of years. To rectify everything, we revert to the old favorite, “When Peace Like a River.” We sound pretty good this time. Mark joins us, and it feels like we’re all in this very special moment together.

Dessert tonight is dark chocolate cheesecake. After such a good meal, this couldn’t have been more perfect—except, everything might have been even more complete had we been able to do dishes in the pink bucket. Nevertheless, we’re good.