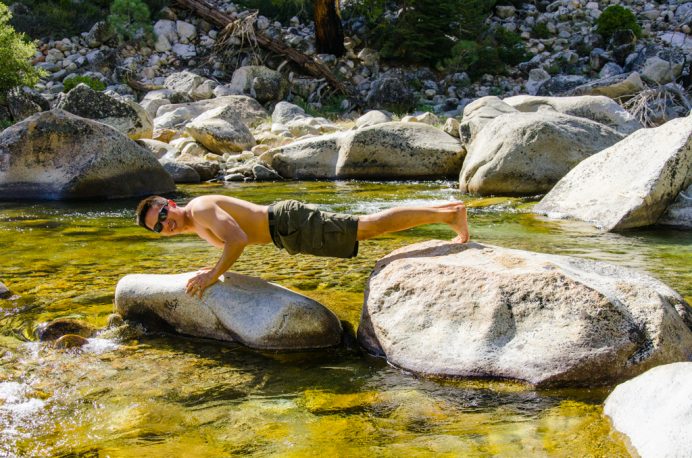 I’m the first one up on this short rest day. The sky is clear, and I emerge from my tent in time to catch the first light on the distant mountains, where the rays paint the tops a fiery orange. Moraine Lake is a perfect mirror. I step onto the lakeshore to take pictures, tiptoeing between bear tracks that Mark pointed out to me the day before.

Again, we have French press coffee. This is my second time using Mark’s JetBoil press device to make the coffee, and it comes out full of grounds. “Mark, why are all the grounds on top?” He examines the setup, and apparently I’d assembled the screen disk upside down. We both laugh at how inept I was at making coffee, and I know he’ll be telling his fellow residents how funny that was. Even until now, addressing me has been awkward, so it’s neither Dr. Wongworawat nor Danny, but the conversation just starts off. “So, when you see Lucas, you’re going to tell him, ‘Danny’s inept at making coffee with the French press.’” I make him practice saying that; maybe it’ll get better.

Then, it’s oatmeal for breakfast. When I was planning our meals, I figured that nuts and seeds would be more calorie-dense, so the oatmeal is fortified with coconut, almonds, sunflower seeds, pumpkin seeds, along with cranberries for sweetness. It’s a hearty breakfast, but I soon find out that Mark doesn’t like seeds. Neither does he like the lighter roast coffee. Anyways, he’ll have to manage for the rest of the trip.

After breakfast, we hang out by the lake, taking in the warming sun. I switch to contacts and sunglasses. On the boulder where we made breakfast, a Sierra Nevada frog emerges. It’s nearly camouflaged and no bigger than half the size of my thumb. I think this species is endangered, and yet, we’re lucky to see the little creature.

Soon, we take off on the trail. Shortly after rounding the bend just east of the lake, we try to look for Whitney summit. The map and compass give us confirmation, and between the trees, the climax of our trip is clearly visible. It’s visible again from Sky Parlor Meadow, though for now, we have to descend further into the Kern Canyon.

At the trail’s bend where it runs parallel with Chagoopa Creek, Wayne spots a bear from behind, drops his pack, and lingers to catch more glimpses. Mickey traipses through a fern field that is beginning to display some fall color. Meanwhile, Mike and Mark are ahead. We soon catch up to them as they wait by the Funston Creek ford. While Mark wants to wait until we descend to the Kern Canyon floor before breaking out lunch, I’m starving and insist that he not ration food. I eat a couple pomegranate-glazed pistachios, and I’m happy.

The descent is treacherous. We pass through some burn areas, and throughout this section, we keep our eyes peeled for rattlesnakes, since there have been reported sightings. The trail switchbacks and crosses Funston Creek several times before ending on the canyon floor. Having held out for lunch, since there was an earlier ration, I anxiously anticipate a flowing stream and a beautiful meadow by which to have lunch. It wouldn’t turn out that way, though. Instead, we hit what the trail crew calls the “Trail of Tears”—through scree and talus fields flanking the west side of the meadow, far from the Kern River itself. We decide to push onward for nearly a mile, and we eventually find relief below Chagoopa Falls, where the cool stream washes away what that trail section did to our feet and spirits.

After lunch, Mark takes off first. He wants to get to Kern Hot Spring to soak his feet. The rest of us take our time. Beyond a carpet of manzanita bushes, the trail leads to a footbridge. Trail crew are there doing maintenance. Mickey asks one of them to explain that scree section below Chagoopa Falls. “Oh yea, that’s known as the ‘Trail of Tears.’ It took us four years to build each mile, hammering out each little rock from the blue granite. That blue granite is really really hard.” Apparently, the old wooden boardwalks through meadows would wash out or rot, and this is probably a better long term option.

Just beyond Kern Hot Spring, we find nice campsites. Knowing that the sun would disappear rather quickly since we’re in a deep canyon, I head down to the hot spring area to take a bath. The tub itself is rather low on water, and the inlet and outlet look like they could be teeming with coliform bacteria. I pass on the hot bath, and instead, take a plunge into the churning Kern. It’s refreshing. Mark finds an area to do laundry, a place that he describes as the power wash cycle. Soon, everything is hanging out to dry.

I hike back to the tub to take pictures. There are bumblebees among the wildflowers. Below, I find Mickey and Wayne soaking blissfully in the warm pool. What E. coli? Just a few feet away, the Kern River roars down the canyon between boulders and rock piles.

Mark is off with his rod and reel. He catches one, and I offer to prepare it. I have the kitchen pack of coarse sea salt, cracked pepper, lemon, garlic, and fresh thyme and oregano that I had picked the day we left home. It’s my first time gutting fish, and I felt strange sticking the blade into the fish’s throat and belly. After cleaning, I salt and pepper the fish and stuff it with garlic slices and minced herbs. I thread a green fir branch through its mouth and out the tail. Meanwhile, Mark is getting a second catch; he later says that he wanted to have two fish, since that would make a better picture. It’s getting dark, though, almost too dark for a picture. I wonder to myself if Mark knows the difference between civil, nautical, and astronomical twilight.

The angler returns with another fish just as I finish making the minestrone soup and boiling the tortellini. He helps me drain the water and add fresh tomatoes, capers, oregano, salt, pepper, and olive oil. There is just enough light for a few pictures of the meal. Click, click, click. Taking pictures of the fish, though, was a disappointment. So, the pressure is on for Mark to catch more later on in the trip.

After sipping hot chocolate and having tiramisu around the warm campfire, Wayne teaches us how to play Rook with his deck of cards. What a great way to end our short hiking day.