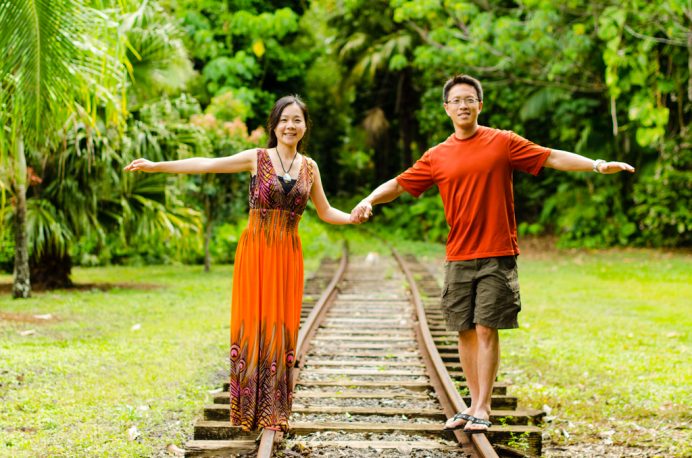 The last morning in Kauai was also another lazy one. The previous evening at the market, we had seen some sea asparagus and decided to try it. Along with egg muffins, we have sautéed sea asparagus—crunchy but very salty.

Our first stop is the nearby Opa‘ekaka Falls. Across the street, there is a small parking lot overlooking the Wailua River where we had kayaked four days ago, and next to that, stacks of volcanic rock transported from the valley form a heiau. We decide that we’ll explore this later on the return trip.

Further along the road, one of the sights is a Hindu temple that is open to visitors between 9:00 and noon. This was founded in 1973, and across the river, they are building the Iraivan Temple, which is projected to be completed in a few years, as parts are being hand carved in India. After touring the grounds and visiting the ancient banyan tree, we arrive in time for the bird feeding ritual.

Back along the road, we briefly stop at the overlook and the heiau. A sign explains the different parts of the structure and where rituals were performed in former days.

The next destination is Wailua Falls. The small parking lot at the end of the road is full, and there are people selling fruits and baked goods, even though posted signs prohibit vendors. The twin falls flow into a single pool below, where there are hikers and swimmers. At the top, right at the fall’s lip, we see more hikers risking their lives to stand as close to the edge as possible. We’re dizzy from looking.

By this time, after having so much ahi, we’re craving noodles. A dining magazine features all sorts of noodles, and we look up some options. At the Kukui Grove Shopping Center, we stroll through and find only limited choices. We then find another nearby place called Kiinbo. This quaint place exudes a feeling old Kauai, and they serve up pretty good soba noodles, both hot and cold.

Across the major road through town, we visit the Kauai Museum. Situated in the old Wilcox building, the tour here is a treat. The receptionist asks us to sign in.

“Where are you from?” She asks in a Japanese accent.

“Oh, do you want some Mexican food?”

That’s the last thing we want, so we ask for suggestions of Japanese food. She tells us that Kintaro is the best Japanese restaurant along the eastern side.

The museum has two buildings, each with two floors. The main building introduces the Hawaiian royalty and indigenous history, and the second story displays Asian artifacts. In the second building, which goes over Kauai’s history, there is a video playing. This show goes for much longer than we expected, but the highlight comes when we hear native Hawaiians from Ni‘ihau speaking their native language. It is melodious, rhythmic, and simply beautiful.

From there, we drive a little further and visit the shops at the Kilohana Plantation. The place used to be owned by Wilcox and produced sugarcane. The house and all the rooms are now touristy shops. Wandering around, we find cute old railroad tracks running into the woods. There is a train that transports tourists around the plantation, but the last ride was at 2:00. We figure it is safe to stand on the tracks for pictures.

Before dinner, we go on a quest for shave ice, as our island experience would not be complete without trying Kauai’s version of this Hawaiian treat. In Waipouli, we ask around. We’re told that there may be some vendors in Kapa‘a. There’s a sign that points to Kapa‘a Town, which we take. This ends up being the longer scenic route through the countryside, but it puts us back on the beach. We park and explore. At a fruit stand, we ask about shave ice. The lady points to the red truck just stone’s throw away. The red trailer is adorned with tee-shirts and other souvenirs that say “Wailua shave ice,” and the guy inside shows us menu options on his iPad. We order the coconut-coconut-coconut and are surprised by how good it is—shave ice drizzled with coconut milk, topped with coconut cream, and garnished with toasted coconut sprinkles.

We take up the Japanese receptionist’s recommendation for dinner and call Kintaro to make reservations. The wait is two hours. We decide to go there anyway and got a table within twenty minutes. We enjoy cold soba noodles, pickles, ahi sashimi, misoyaki butterfish, and vegetable tempura until we are overstuffed. As the lady said, this turns out to be the best Japanese restaurant.

After having been on eleven flights, there is one flight left. We zip through security and wait in a crowded lobby. Onboard, we find the flight to be relatively empty. Each getting our own row to sleep, we get some rest on the smooth flight to Los Angeles. After this twentieth time through an airport, we are happy to catch a ride to Loma Linda. Finally, we’re home sweet home.