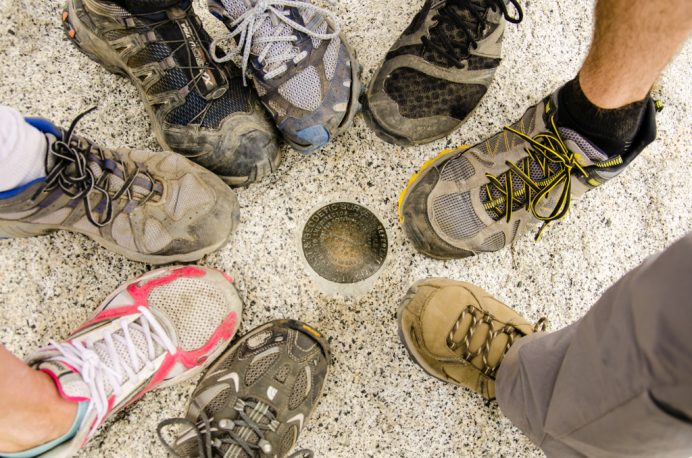 This trip was to realize what was left unaccomplished last time with the Orthopaedic Surgery Interest Group (OSIG). The goal, for those of us who are struck with summit fever at times, was to stand on Mt. San Jacinto’s peak.

Andrew, Co-President of OSIG, had sent out the notices weeks before, and the original student group was larger. The early (5:45) departure might have deterred some on this Saturday morning; or, they simply made other plans.

We arrive at the Idyllwild Ranger Station, self-register, and backtrack to the trailhead. At 7:40, we’re off.

The trail to the 10,834-foot peak switchbacks up the slope pretty abruptly. Somewhere along Fuller Ridge, maybe it was before, we catch glimpses of Mt. Baldy in the distance. Dense clouds and the occasional drizzle provide the refreshing coolness. Along Deer Spring Trail, a small trickle is what’s left of the creek that feeds the nearby campsite. Nearby, hidden under a large boulder, a wispy columbine ekes out its existence.

Soon, we reach Little Round Valley, where we turned around last time because of the lighting and thunderstorm conditions. This time, it’s much different—gravel bed instead of streams; the corn lilies and other wildflowers are still green, able to find and suck up water from beneath the forest mulch layer.

Having taken plenty of breaks, we reach the summit five hours after leaving the parking lot. It’s my first time standing on the peak of this mountain. Here, we take in views of the San Bernardino mountain range and the Coachella Valley below. It’s overcast, windy, and cold. After having a quick lunch and taking some summit pictures, we head to the historic stone shelter.

The 45-minute rest at the summit area could have been longer. The hike down went faster, but it’s harder on the knees. There is little time for napping.

We make it down to our cars before 5:00. Looking at the trail mileage sign again, I think the signed 5¼ miles is wrong. The Forest Service website states 6 miles one-way, and another site says 13.2 round-trip. I think this latter number is closer to the actual mileage. Nevertheless, it’s good to have made it to the top. Summit fever—cured!