Part 4, In Juneau and Skagway 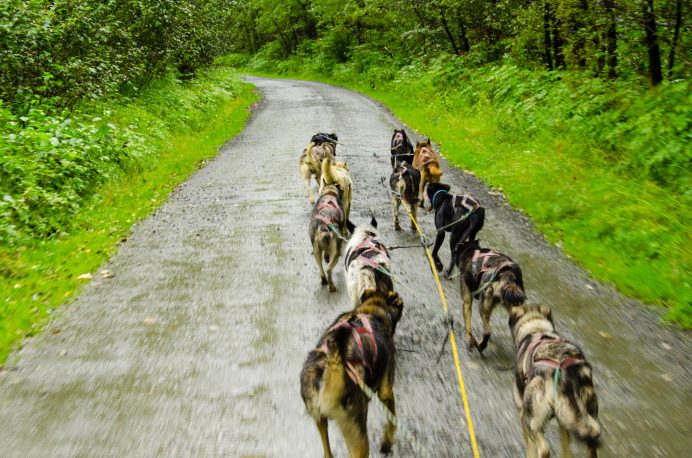 The crew makes up time, getting us to Juneau only slightly later than scheduled. A shuttle bus drops us off at the tramway station, and we walk the rest of downtown. The old St. Nicholas Russian Orthodox Church welcomes tourists like us and worshipers alike. Andy and I make a quick pass through the State Capitol. Nothing is in session, and the Speaker’s seat waits to be usurped. Our brisk walk takes us back to the tramway station, and we hop on the next shuttle. Back at the dock, a van takes us meandering through the AJ Gold Mine ruins to arrive at the Gold Rush Summer Dog Camp. Following an introduction, twelve trained Alaskan sled dogs race us along the road, bumping over potholes, puddles, and pools. Alice gets to hold a six-week-old puppy. Back on the ship, Libby Riddles delivers an inspiring story of her dreams and journey to become the first woman to win the Iditarod Trail Sled Dog Race, even with the mishap of losing her dog team early in the competition.

We then set sail for Skagway. Early morning, we board the White Pass and Yukon Route train and snake our way up the narrow gauge track, coursing by the old cemetery, the Skagway River, Bridalveil Falls, two tunnels, and the historic cantilever bridge of 1901. However, mist shrouds any hope of having distant views. After eighteen miles, we cross into and back out of British Columbia. Returning to downtown, we visit the heart of the Klondike Gold Rush, now pulsing with tourists rather than prospectors. Before we leave Alaska, local entertainer Steve Hites sings ballads of the old gold rush and recounts stories of Alaska’s path to statehood.

We retrace our path out of the Lynn Canal and into the Chatham Strait as dinner is served. The after dinner entertainment is the International Crew Talent Show, featuring some of the engineers, waiters, cooks, and other staff. By morning, we’re sailing the open Pacific Ocean on much calmer seas sprinkled with wavelets.