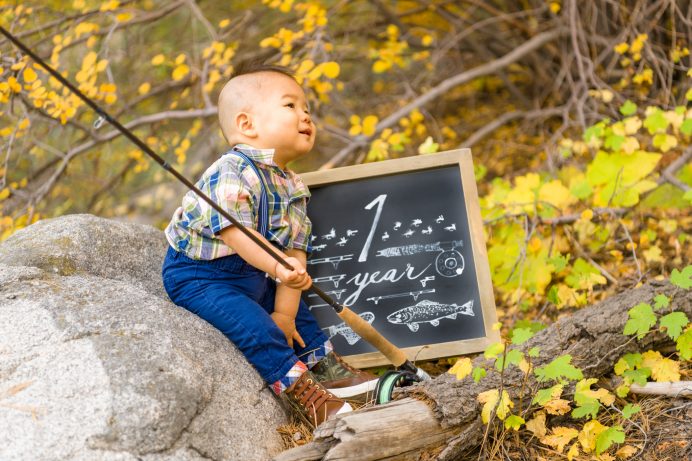 Today, our baby Jayden turns one! We’ve been so blessed by the smiles, giggles, laughter, and cuteness. And in this one year, we’ve done so much together. We first camped at Joshua Tree. Then, we celebrated the first 100 days. Soon, Chinese New Year came around. Altogether, we spent six nights camping and one night in a remote backcountry hut. The first major road trip took us along the coast from California, through Oregon, and into Washington. The second circled around Iceland. What an adventurous year!

For the first birthday present, we wrote and illustrated this board book. Zhan He Catches Fish—a story penned in the 5th century BC—is fitting for the birthday party’s fishing theme.

Zhān Hé used a single strand of silk thread for line, pointed needles for hooks, slender bamboo for a rod, and split rice grains for lure. He managed to catch cartloads of fish from the depths and the rushing rapids— the line not breaking, the hooks not stretched, and the rod unyielded.

The King of Chu heard about this and thought it was extraordinary. He summoned Zhān Hé to ask him how he does it.

Zhān Hé said, “I heard my late father recount: ‘When the archer Pú Qiězǐ shot, he used a weak bow fitted with a thin string. Shooting with the wind, he hit two orioles in the clouds because of his complete concentration and precise handling.’ I followed his method and learned to fish, taking five years to perfect my technique. When I come to the riverbank to fish, I mind nothing else other than fishing. Casting the line and setting the hook, my hands are neither heavy nor light, and my mind is without distraction.To the fish, my hook and lure are like dust and froth. They swallow unsuspectingly. Therefore, from weakness comes strength, and lightness overtakes the heavy. When governing, all under heaven can be ruled with one hand. Is there anything that is not possible?”