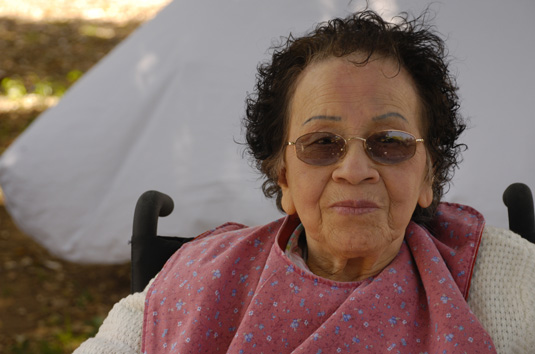 My grandma comfortably passed away four days ago at the age of 90. The guqin piece below, Evening Call of the Raven 烏夜啼, is dedicated in her memory.

’Ma was born April 19, 1924, the sixteenth day of the third lunar month, year of the Rat 甲子年三月十六, to my great grandparents—Chua ChingKee 蔡振記 and Tan AhYoo 陳阿如—in Chenghai 澄海, Guangdong Province 廣東省, China. My great grandma was from a family that sold cooking oil and exchanged currency, and she married my great grandpa, who dealt in the gold and silver foil business. On that spring day, he was 44, she was 36, and this was their ninth child.

Grandpa had been in Thailand for business. It was 1939, and he traveled back to Chenghai to marry Grandma. On the fifth day of the fifth lunar month (June 21), word quickly spread that the Japanese had landed at nearby Shantou 汕頭 harbor. A few days later, Japanese soldiers were seen peacefully roaming the streets of Chenghai. Soon thereafter, they left town. But this would only be a brief hiatus. About a month later, the Japanese invasion took place full force; Grandpa fled with his second brother to the countryside, leaving Grandma with his youngest brother at home, tucked away in the attic. The whole town was pillaged—women taken away and men killed and burned. After the Japanese moved on, Grandpa returned to town, and Grandma joined him and his family.

Shortly after marrying, Grandma stayed in China while Grandpa returned to Thailand. She stayed with his family, taking care of his mom while he sent back business earnings for support. They saw each other only several times over the next seventeen years. The Communist takeover in 1949 closed China’s borders, leaving Grandma to rear my mom and her sister (Auntie Julia) by herself.

In 1956, Grandpa arranged for the family to be smuggled out of China through Macau on a small boat. Auntie Julia tripped in a pothole and started crying, causing the border police guards to take chase with their dogs. Then, by way of transfer through refugee camps, ’Ma brought the two small children safely out of China and finally to Bangkok to be reunited. There, she converted to Christianity, and both my grandparents became active members of the Chinese Seventh-day Adventist Church in Bangkok.

For nearly the next four decades, my dad and Grandpa grew the family business. ’Ma would go along on business trips, many of which were in the Middle East. At home, my grandparents had four more children. Except for my mom, all five of them were sent to the Hong Kong and the United States to get the best education. In the meantime, essentially all of my parents’ and grandparents’ family business earnings went to support college tuitions.

Support continued on after the move to Hong Kong and expanded to cover extended family left in China. Many of my first patchy memories of Grandma are from the days here.

Five years later, we moved to Loma Linda, California. Aside from short trips, she’s lived here ever since. Until Grandpa passed away in 1998, they lived a life of generosity, spending most of what they saved funding local and overseas churches and supporting family and relatives back home.

I’ve developed many fond memories. ’Ma introduced me to mushrooms stir-fried with soy sauce. She darned all my socks and knitted cozy blankets. Grandma loved her folding wooden pillow, even though they make soft ones out of goose down. She’s the best at eating fish head, and her dissection skills remained sharp, even up until recently. Then, a subdural bleed took away many of life’s simple pleasures. For her, it had become night.

At night, the raven’s call, often thought to be a bad omen, was considered lucky in Chinese literature associated with this piece. The melody is attributed to a Liu Song Dynasty prince, Liu YiQing 劉義慶 (403-444). In the year 440, Liu YiKang 劉義康 (409-451), Regional Inspector of Jiangzhou, was banished by Emperor Wen 宋文帝 (407-453) to the region where Liu YiQing happened to be governor. The two cousins were overjoyed to be reunited. This displeased the emperor, who ordered Liu YiQing to leave his post and return home. There, the family remained in fear of what might happen. One night, Liu’s wife heard the raven call, hearkening to an auspicious sign that he would be pardoned. That same year, after it really came to pass, he composed this piece to commemorate the good omen.