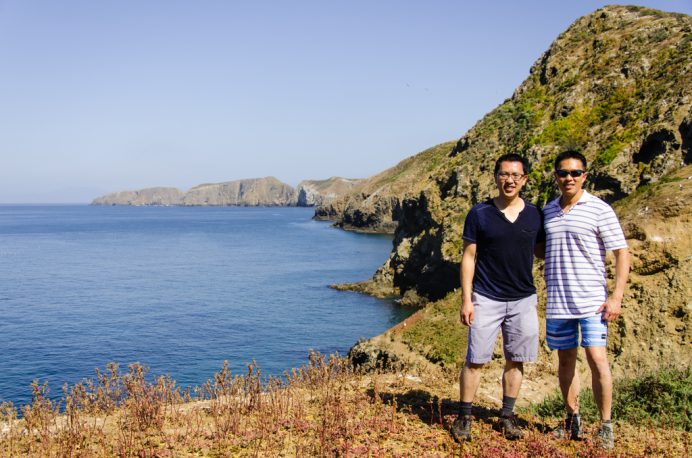 It’s exactly four weeks until the wedding, and my best man brother Andy put together an amazing guys’ sailing trip.

Everything had started with a text message from Andy about doing a bachelor party. Coincidentally, on one of my surgery days, the anesthesiologist Brent suggested that we go on a sailing trip. And there it was—the trip plans were hatched. Brent took care of the sailing details, and Andy made sure we would eat well.

After driving out at daybreak, we all meet up at the Oxnard marina. It’s good to see everyone again. Bill, my med school study partner, had driven up from Dana Point. Brent, Mark, and Daniel work on the catamaran to get it ready. The best man and the rest of the groomsmen—Barth, Jeff, and Corey—and Bill, haul stuff from the dock.

Soon, we push off, with Dan at directing at the bow and Brent at the helm. Mark takes over, and Brent gives us the safety orientation. He calls the Channel Islands National Park office to find out about landing on Anacapa Island.

The boat ride over is filled with highlights. After all, it is the first sailing trip for most of us. The biggest surprise, however, is the sight of dolphins. All of a sudden, they see our boat and decide that it’d be fun to play with us. Many of them pointed their noses in front of our bow and race us, trying to stay ahead. This lasts for several minutes. Barth leans over the front railing: “I going to reach down and touch one of them!”

At Anacapa, we pass by Arch Rock and the dock where stairs lead to the Anacapa Island Lighthouse. We find the cove to be somewhat treacherous and decide to retreat to Frenchy’s Cove. Many of us find relief in the stiller waters.

Making lunch is a challenge. I start with putting together the salad—four heads of lettuce, olive oil, lemon juice, salt, freshly ground pepper, and shaved Parmesan cheese. Bill helps me bake the focaccia topped with chopped rosemary picked this morning. I am thankful that Bill has no feeling of seasickness. Otherwise, there would be no lunch. The spinach cheese ravioli goes in the pot, and the vodka sauce is warmed. Dan lights the grill, piles on the lemon pepper asparagus, and roasts the artichoke halves marinated in garlic and thyme. After Jeff says the blessing, we all partake.

Moored in Frenchy’s Cove, we find ourselves nestled in calm waters and surrounded by West Anacapa’s giant arm. The peak blocks off much of the exposure to the southern winds. Brent paddles out on the inflatable kayak. I join my groomsmen and head to shore on the rubber dinghy.

We climb part of West Anacapa’s east flank. The slopes hold the brown pelican preserve. Seagulls vie for nesting spots as well. From this knife-edge ridge, we can peer across the wide southern expanse of ocean. The seas look rougher there, with waves crashing on the craggy seastacks near the inlet.

Inelegantly pushing off from the island on the dinghy, we all get wet. But, that’s the least of my concerns while back on the catamaran. It’s the constant rocking and the slightly effective scopolamine patch that bothers me the most. Brent retrieves the anchor, we hoist sail, and catch the wind as we head back to the mainland.

With favorable winds and achieving speeds of over five knots, I find the seasickness to be less of an issue. Barth wants to eat, so I bring out the cheese and fruit plate—white cheddar, brie, smoked gouda, grapes, and Bartlett pears. We also have pita chips with roasted red pepper hummus. The perfect place to catch the breeze, enjoy the scenery, lounge, and snack is right on top of the deck.

Soon, Anacapa is far behind us. The dolphins rejoin our boat. The setting sun turns everything golden. Corey helps me serve up peanut butter chocolate cake.

We’re all giddy at the end, a little dizzy from being seasick, and happy from spending a relaxing day to experience sailing, making new friends, and renewing old friendships. I’m glad I took Brent up on his suggestion. It’s good to see Dan again and to meet Mark. Bill and I finally caught up after so many years. And my wedding party got a chance to bond a bit more. After all, my brother and best man commissioned quite an amazing bachelor party.