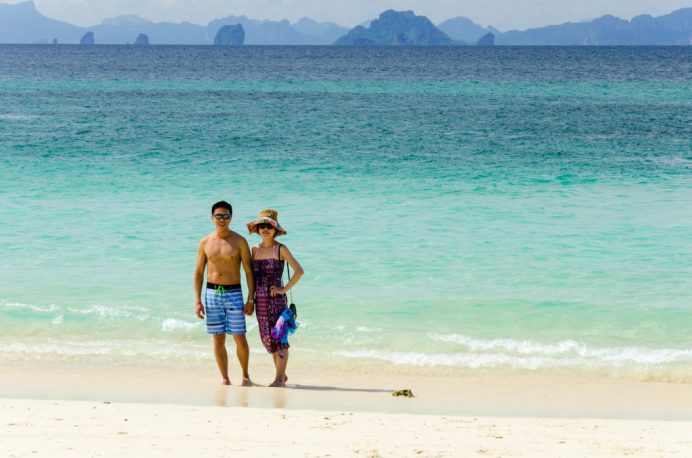 Day 7 rolls into Day 8 as we are now stranded at the Kunming airport. The agent at the check-in counter had told us that our flight no longer exists and that we are to check with the international supervisor. Then, we are told that we had been rolled over to the next flight, which will be in the wee hours of the morning. This flight, however, is delayed by about an hour.

It’s nearly daybreak by the time we reach Bangkok. It turns out that it’s nearly the same time we reached Wenzhou days earlier, which is minus an hour in Bangkok. So, it’s still dark and we get to catch an hour of shuteye. Then, we meet up with family for breakfast.

After a day of running errands and shopping, we enjoy a gourmet dinner with close friends.

Given all the flight problems we’ve had, the trip to Phuket on Day 9 is a pleasant surprise: no delays and no gate change. As the southbound flight swerves right and hooks around Ao Phang Nga, little Karst formation mounds appear, first poking above the flat plains, then jutting straight up from the sea. Sunlight reflects off the green waters.

Phuket is sweltering in a heat wave. The beautifully decorated Sino Hotel, typical of guesthouses, has an open-air lobby and hallways. Luckily, the rooms are air-conditioned. First, we book the next days’ events; then, we get dinner recommendations from hotel staff. Raya turns out to be a disappointment—a tourist trap with mediocre food.

Our tenth day begins with a nice breakfast spread at the guesthouse. There are hot options, salad, and a lot of Thai desserts. During breakfast, the van driver arrives early. Apparently, he was quoted a time half hour earlier than what we had been told. Anyways, he waits while we finish and gather stuff. We are transported to the marina, where we get on the cruise boat for Ao Phang Nga.

Torrential rain greets us on the dock and continuous to drench us. The boat hands quickly lower the plastic awnings, but raindrops flying sideways still make it through. But soon, rain gives way to silver clouds and later to blue skies. We visit many islands: Ko Lawa Yai, Ko Phanak, Ko Hong, Ko Tapoo. There isn’t much to do on the first island except for taking pictures among all the tourists and trying to stay away. The highlight is Ko Hong where we kayak through rooms and caves, where forest canopies shade the clear green waters below. Ko Tapoo, also known as James Bond Island, is another tourist trap. There is virtually no standing room at the longtail boat landing dock. From there, we hike over to another side of the island where we find respite along a more secluded beach section. Another highlight is the eagle feeding on the way back. With whistle signals, the eagles descend on the fish pieces that are cast out the stern of our boat.

Walking along Montri Road, on which our guesthouse is situated, we grab dinner at a local open-air marketplace. The cook-to-order food stalls make pretty good food, and we sample pad thai, pad see-ewe, and fried fish, along with snakefruit and mango smoothies. Everything is surprisingly good.

After breakfast on Day 11, and this time waiting an hour for a late driver, we arrive at a different marina. Here, we wait again for boat repairs. There will be snorkeling today, and interestingly, masks and snorkels are free with the boat tour, but fins are extra. By speedboat, we arrive in the Ko Phi Phi area, which, like yesterday, is overrun by tourists. The speedboat drivers are amazingly adept at navigating through tight channels and among the traffic jams at all these places. When these speedboats are out of view, traditional wooden longtails complement the picturesque scenes of green hills pushing up from the azure sea. At Monkey Island, we are told that at this particular time, the tide has obliterated the beach. Landing is not possible, but the monkeys are out for handouts. A baby clutches its mother closely as she scrambles along a thin branch to catch some bananas. Then, there is snorkeling, lunch, jet skiing, and more snorkeling. By the end of the trip, we are dripping wet, sticky and salty from the ocean. Showering and changing into fresh clothes bring relief after an activity-filled day.

Lemongrass Restaurant looks deceptive in that it is empty. We had walked by there the first day on the way to Raya but decide to give it a try anyways, since it is one of the few air-conditioned place in town. The waitresses are delighted that they finally have customers for dinner. We order some classic Thai salads—coconut shoot, papaya, crispy morning glory, wing bean. As it turns out, Lemongrass would become one of our favorite restaurants.

Day 12 starts out with the usual bountiful breakfast at Sino House. Then, we stroll through charming old town, with all the Sino-Portuguese buildings, some being more dilapidated than others. The Blue Elephant Cooking School is probably the best upkept structure. Cute white bird cages adorn the grounds’ giant banyan tree. For a special treat, we stop by Swensen’s, which happens to be a San Francisco-themed ice cream parlor that is more famous in Thailand than in the States. We exceeded our ice cream quota for the year. For lunch, we go back to Lemongrass to try other dishes, and we agree that this is the best restaurant in Phuket Town.